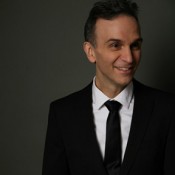 Gil Shaham launches his 2015-16 season on September 24 at the Berlin Philharmonic with Korngold’s Violin Concerto under Zubin Mehta. Additional highlights over the upcoming months include Bach with the Los Angeles Philharmonic and Gustavo Dudamel, Brahms with the Orchestre de Paris, Tchaikovsky with the New World Symphony, and Mendelssohn during a residency at the Montreal Symphony. Gil also revisits John Williams’s Violin Concerto with Stéphane Denève and the Boston Symphony, where he previously recorded the concerto under the composer’s direction. As well as undertaking a tour of European capitals with Sejong and a residency at the University of North Carolina at Chapel Hill, he continues touring key North American venues with accounts of Bach’s complete unaccompanied sonatas and partitas in a special multimedia collaboration with photographer and video artist David Michalek.

In February, Gil looks forward to the release of a new recording – Violin Concertos of the 1930s, Vol. 2 – on his own Canary Classics label, which he celebrates with performances of Bartók’s Second with the Philadelphia Orchestra at Carnegie Hall and the Kimmel Center, Barber with the Orchestre National de Lyon and Orchestra dell’Accademia Nazionale di Santa Cecilia, and Prokofiev’s Second on an extensive North American tour with The Knights.