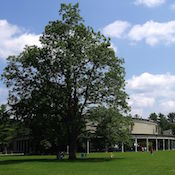 Making a return to the Tanglewood Music Center on August 22, Gil takes part in a program devoted to the movie scores of John Williams, including Jurassic Park, Jaws, and Star Wars. Conductor Keith Lockhart has stepped in to replace the composer himself, who unfortunately was forced to cancel due to a back ailment. Guest conductor David Newman will also lead a salute to Paramount Pictures featuring music from films including Forrest Gump, Sunset Boulevard, Sabrina, and The Godfather.

Tickets and more information about the performance can be found here.