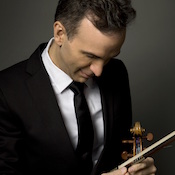 Gil’s recent release of Bartók’s Violin Concerto No. 2 and Prokofiev’s Violin Concerto No. 2 — the second volume of his “characteristically vivacious and thoughtful series” (San Francisco Chronicle) surveying violin concertos of the 1930’s — has been met with acclaim from critics. Issued on Gil’s own label Canary Classics, the album features the Stuttgart Radio Symphony Orchestra under Stéphane Denève and The Knights under Eric Jacobsen.

“One of Shaham’s strengths is his appreciation for personality as a relevant context. Thus, each concerto is given its own distinctively different rhetorical stance through Shaham’s interpretation…and Shaham is not shy in taking a vigorously visceral approach to many of the passages,” notes the Examiner, continuing to say that “Shaham is definitely an adventurous performer. Hopefully, he will not hold us in suspense with regard to any further work on this project.” The Guardian observes that “Shaham sustains long phrases with plenty of substance to the sound, and brings a poised, well-articulated lightness to the faster passages.”Gil “plays with a marvelous blend of raw vigor and silky elegance, and it’s a combination that not only serves both pieces well, but also brings out surprising points of connection between them,” writes the San Francisco Chronicle.